It’s Not About You, It’s About Them! 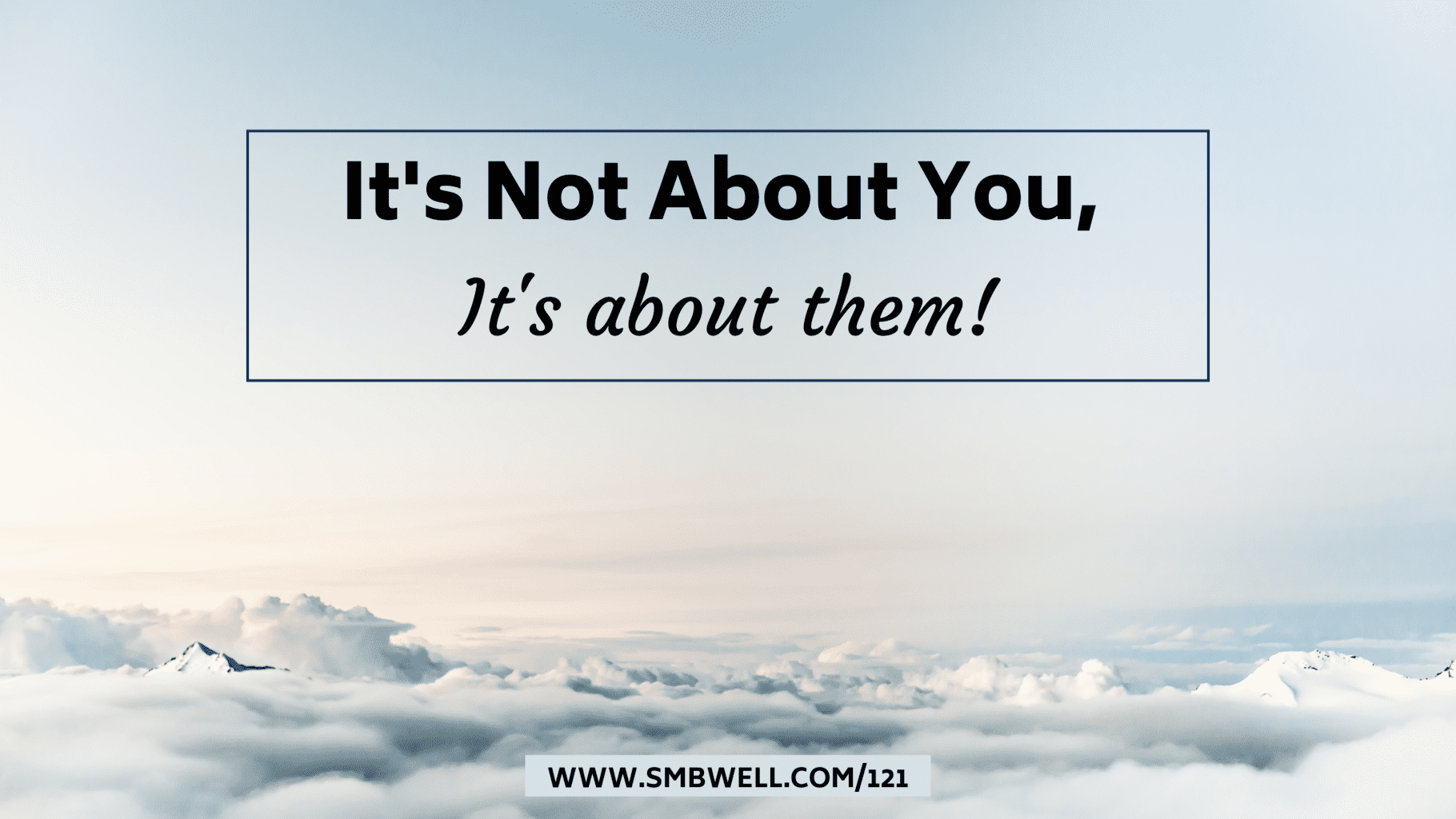 Hey dear warriors, lean in close. I have a big secret for you today. A big aha that will impact your overall happiness and the health of all of your relationships….

It’s not about you.

One of the greatest things we can do for ourselves and for the people with whom we are in a relationship with is to realize that it’s not about us.

The more we remind ourselves of this, the more peaceful and drama-free our lives will be. Our brain tries to add drama to our life. Our brain is a story making machine. It likes to know the “why” behind what’s going on and it’s very good at making up crazy stories for the things going on in our lives. So, if a store clerk makes an odd face as we walk by, our brain feeds us the thought “he was annoyed because you were in his way”. Oh my lord, do we have any evidence to support that thought? No, but if asked, our brain sure could find some!

Today I am here to help you step back from the brain’s immediate reaction so that you feel more peace and ease.

Let’s start with a tool I use most days and call Alternative Explanations. Take that example of walking by the store clerk and him making an odd face. And say your brain does feed you the thought “he was annoyed because you were in his way”. Enter the tool Alternative Explanations. You ask your brain, what else might have been going on? What are some alternative explanations for why he might have made that face that has nothing to do with me? I then am able to come up with alternative explanations for his odd face such as: He was thinking of a fight he had with a co worker, he was holding back a burp, he was thinking of all the work he has to do before he can go home, he was thinking of an earlier phone conversation with his mother; he was thinking of his son and worrying about his future, he was trying to get something out of his back tooth with his tongue without opening his mouth, etc… I could go on and on. The point is to do this. To not settle on the first thought your brain comes up with. To encourage your brain to think bigger, to not be so quick to jump to the worst case scenario that somehow involves you.

I have another favorite tool to help remind me that other people’s actions and behaviors are not my responsibility or all about me. It is a communication tool where as the alternative explanations is a thinking tool. It is called CCC and that stands for clear concise communication. CCC saves me so much drama in my relationships. Let’s use a new example. Say my husband walks in the house after being out somewhere and moves quickly past me without any sort of greeting. What might your brain come up with? My brain would be off and running. Because of past programming in relationships, my brain would probably first come up with some sort of story along the lines of “I must have done something to make him angry with me” or right into “he must be angry with me”. This can feel very panicky and is a great opportunity to take back control of your mind by using CCC. Thank you brain, but no. Clear concise communication. In this case that would sound like me saying: “Hey hon, when you walked by me without saying anything I made up the story in my head that you’re angry about something. Is that true?” That’s clear, concise, communication, for sure.

Instead of letting my brain make drama, I open my mouth and communicate. Clearly. Concisely. Get it out of your head. I thought he may be angry. I don’t give that thought time to germinate and instead say it aloud using CCC.

This is so super helpful. How many times do you make assumptions about what’s going on or about why other people do what they do? Alllllll the time warriors! We think we’re some superhuman unicorn that can read people’s minds. Hate to burst your bubble, but we can’t read other people’s minds. Add to that, the stories our brain comes up with are usually untrue and too personalized.

Here are some other examples of where I used to read other people’s minds and may be where you do too: Have you ever thought these thoughts?

-She didn’t call me back. She must be angry that….

-He never returned my email. He must think…..

-She cancelled our coffee because….

In all of the above situations, it’s in our best interest to not finish the sentences in our heads and communicate openly with the other person instead. Why? Because we do not know what the person is thinking. Our brain makes up stories about why things happen but we can not read other people’s minds. The only way we know what someone else is thinking or feeling is if we open our mouths and ask what they’re thinking. Use CCC and find the courage to ask questions in your relationships to avoid drama.

Take the above example of your friend not returning your call. Initially you think “ she didn’t call me back. She must be angry that…”. Here’s an opportunity to be courageous and deepen your relationship. Instead of making assumptions, ask her why she didn’t return your call. Say something like “Hey, when you didn’t return my call my brain was making up all this drama. Could you let me know what’s going on?” What’s the worst that can happen? She’s angry you asked? Well, you already think she is angry so no loss there. Don’t make assumptions about other people, what they’re doing, or what they’re thinking. Communicate as truthfully as you can.

One quick story that I love thinking about and I have no idea where I heard it. Once there were two monks taking a long cross country trek. One was the teacher and one was the apprentice. Early one morning they got to a river and found two women unable to cross on their own. The women asked the monks if they could climb on their backs to cross the river. The monks were not supposed to touch women so the apprentice looked to his teacher to see what he would do. The teacher turned to allow the first woman to climb up on his back and so the apprentice did the same with the second woman. When they reached the other side, the monks put the women down and continued on their way. After a long day of silent walking, the monks reached their evening destination. The apprentice turned and asked his teacher: “What are we going to do about the women?” The teacher turned to the apprentice with a blank look and said “What? Them? I put her down hours ago”.

I love this story as it shows us the power of our thoughts and our own power to control our minds. The apprentice monk spent the day thinking and worrying and thinking and worrying about the woman and his action. Whereas the teacher monk made a decision in the moment that made sense to him and moved on. I love reflecting on my own mind and thoughts and seeing what I’m holding on to and what I can put down. This lesson pairs beautifully with last week’s podcast on how to raise your vibration. If you haven’t listened yet, queue it up after this one. Its so helpful to see where we’re putting our energy. What are we still carrying? Am I still thinking of that shop keeper? Of my husband walking by? Take the action and move on. Put it down.

Where are you holding on to other people’s actions or decisions? What can you put down?

Before I sign off, it is important to note that sometimes we are in relationships with people who want you to think it is 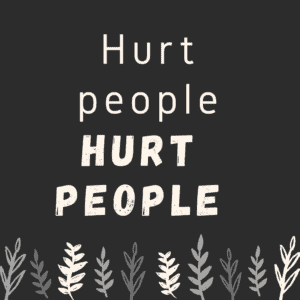 your fault or want you to think it is about you. I spoke of these types of people in the post called how to deal with energy vampires. It is especially important for you to realize that it’s not about you. Their actions, their moods, their behaviors are not because of you. When someone is treating you badly, your first step towards a healthier relationship with that person is to understand that it’s not about you, it’s about them. They act how they act because of their own wounded self and immaturity. It is never your responsibility to be a punching bag or a door mat. I’ve had many such people in my life and one of the most liberating and freeing things I’ve done is to set them free to be them while allowing myself the freedom to be me. This is not easy yet it is worth it. Please reach out if you are in a relationship with someone who is always blaming you for the way they act or for what they do.

Where can you use the tools CCC and alternative explanations this week?

And hey, could you do me a favor and share this episode with someone who matters to you? The more we spread this message, the more of us out there living drama free lives the better. You matter to me.

-If you liked this episode and you want more Susie, sign up for the weekly wellness newsletter full of more awesome tips and tools to help YOU! http://bit.ly/2gYQMlA
-Continue with the conversation over in our Private Facebook community of women just like you https://facebook.com/groups/smbwell
-On Instagram at https://www.instagram.com/smb.wellness/

Who’s in? ⁣ Type below the day of the week and

If you've been following me for a while, you know

Most mornings I see between 10-30 people outside w

Reminder, emotional intelligence is something we b